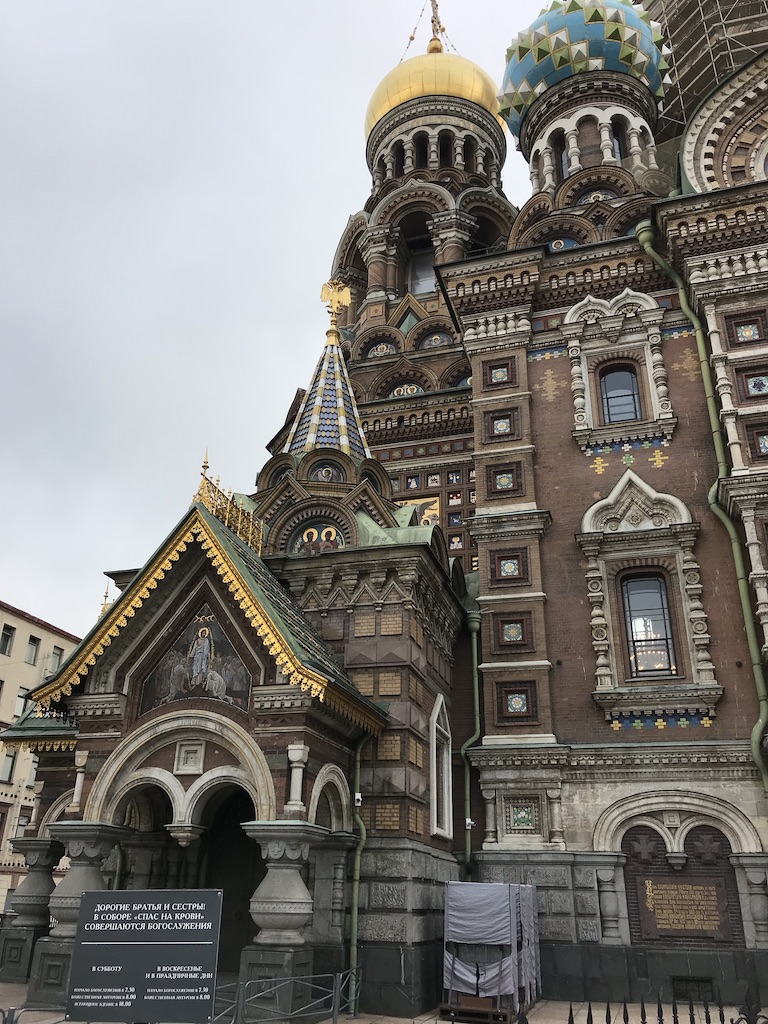 After a very long first day, we had a bus tour of Saint Petersburg where we could stay on the bus and not have to do anything. Both my son and my daughter were asleep on the bus 10 minutes after we pulled away from the boat. I was not paying attention to whatever the guide was saying on the bus, either. We all were exhausted.
I must have been paying attention at some point because the tour guide was excellent, and we learned a few new things on this tour. We stopped several times, but I honestly don’t remember getting out except once. I know we got out when we visited the Spilled Blood Church, which was amazingly beautiful. I believe I was the only one to get out of the bus on this stop. As usual, you had to be very wary of pick-pockets.

We came back to the ship, had an hour to chill out, and then had to be back off the boat for a cooking class. As we exited our ship for what seemed like the 10th time we were greeted at our tour bus with a familiar face- Katya, who was our private guide the day before, was our guide for the cooking class. We were so excited. The bus dropped us off at a restaurant which was already set up for a bus-load of people.
The menu item was something called pelmeni, which is a typical food amongst the Russian people. A pelmeni is a stuffed dumpling of sorts, usually stuffed with ground beef and seasonings. We had it served with a couple of finger foods, which included caviar on toast and pickles. The chef demonstrated how to make the pelmeni from scratch, and then he invited us up to the tables and made them ourselves. After making the pelmeni, the chef cooked them in boiling water, and we ate them afterward. They were good, but nothing special. After we ate the pelmeni that we made, the kitchen staff brought out pelmeni that the chef made in advance. The difference was noticeable, but I think he cheated because they tasted like they were sauteed in butter. Everything tastes better in butter. Now, throughout this whole time, we were treated to 4 different types of shots of vodka. One was spicy pepper vodka, and several of the others were of different alcohol content. I honestly thought they were all incredible.
Since my wife drinks hardly at all, she barely tasted each one and then gave the rest to me. After a total of 8 shots, needless to say, I couldn’t feel my face. Thankfully I didn’t make a fool out of myself, like falling up the steps of the bus when leaving. I’m not sure, but I think we went back to the ship after that.

After reflecting on it, we had such a wonderful time at the cooking class. I think it was my wife’s favorite excursion. We got back to the ship just in time for our late dinner and were looking to retire to bed early. We had another early morning in Helsinki, Finland.